The Bangkok Metropolitan Administration is pushing ahead with the Gold Line elevated rail project from Thon Buri railway station to Klongsarn district office covering a distance of 2.68 kilometres estimated to cost 3.8 billion baht. 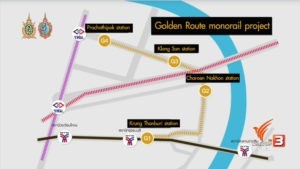 Transport deputy permanent secretary Phirapol Thavornsupacharoen said that the feeder rail project would be incorporated into the second phase of the mass transit development master plan of the Office of the Transport and Traffic Policy and Planning.

The 2.68 kilometres section of the Gold Line will have five stations with the route between Taksin hospital and Wat Anongdaram being elevated.

However, certain section of the route overlaps with the Purple Line underground route for a distance of about 400 metres from the Memorial Bridge station to Ban Khaek intersection and, for that matter, the City Administration has been ordered to adjust its blue print to correct the overlapping issue and to speed up the construction plan to be completed in the middle of next year, said Mr Phirapol.

Mr Suthon Anakul, director of the City’s traffic and transport office, construction of the first section of the Gold Line, about 1.8 km long was expected to commence in the end of next year. Construction will take one year and a half.

Train fees are 15 baht per trip and it was estimated that about 40,000 people will use this train service each day.

What is a Piling Rig