The construction of the Morocco’s high speed train is projected to be complete in 2018; this is according to Rabie Khlie, the Head of the National Office of Railroads (ONCF).

The new high speed train which is better known as the TGV will link Tangier to Casablanca and is 86 per cent complete. 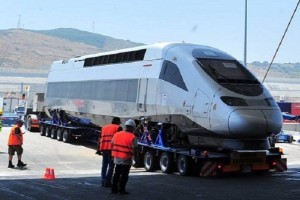 The line is set to connect the two cities in only two hours and 10 minutes instead of the current five-hour train journey, at a speed of 320 kilometers per hour.  It also passes through the city of Kenitra, with the trip to Rabat from Tangier taking only one hour and 20 minutes.

Khlie explained this while speaking at the opening of the Sixth Annual International Conference on “Security and Safety of Rail Activity.” The conference is an opportunity to bring international experts together in order to share their experience in the field of rail and its effective safety.

In March this year, The Islamic Development Bank (IDB) granted a loan of US$ 121m to the ONCF.

The proceeds from the loan will permit ONCF to proceed with the construction of stations for TGV, believed to be the first one to operate in Africa.

Morocco, France, Saudi Arabia, Kuwait, and the UAE, are funding the TGV’s US$2 billion investment for new trains and tracks.

Morocco received delivery of the first carriage for the TGV in July 2015. In September, the second fleets of the TGV arrived at the Port of Tangier Med.

The 183km high-speed line will operate between Casablanca, Rabat and Tangiers and to achieve the target of 6 million passengers a year, there will be a departure every hour from Casablanca and Tangier, with the aim to achieve an average occupancy rate of 70%.

Spare parts – How they can reduce fleet downtime.

Prepare for road construction in rainy season and STOP it from affecting your projects!

Construction of Inga 3 hydroelectric project in DRC gets new impetus