The construction of The Sydney Harbour Bridge started July 28th 1923 and was completed January 19th 1932, taking 8 and a half years with 1,400 men. The total cost for construction $4.2 million which took 55 years to pay it off. Also, 16 lives were lost due to the dangerous construction procedures at the time. Homes of up to 800 families living along the path of the bridge were also demolished without any compensation given. The bridge is located in Sydney, Australia in close proximately to The Sydney Opera House, which are both two of Australia’s famous landmarks. The bridge allows for rail, vehicles, walking, biking and boats. These forms of transport can either pass under, through or over. The Sydney Harbour Bridge allows people to walk over the top of the bridge, which allows them to view the beautiful city of Sydney. The bridge is known as ‘The Coat hanger’ due to its iconic shape. 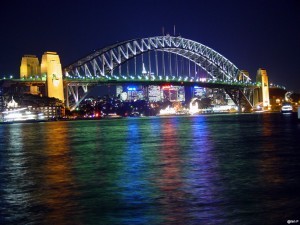 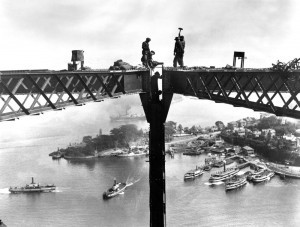 The Sydney Harbour Bridge is the tallest steel arch bridge in the world which measures 134m from the top to water level. It was also the worlds widest long span bridge measuring at 48.8m wide. This was until the New Port Mann Bridge in Vancouver was built in 2012.

The 53,000 tonnes of steel, which was used to construct the bridge was constructed at Dormon Long which was in Middlesbrough, United Kingdom, the town known best for its steel production. This is the same area where us at Sigma PlantFinder are based! When walking over the bridge you can see on the steel that it says ‘Dormon Long’ on it. Teesside Steel had a large impact on the construction of The Sydney Harbour Bridge. Dormon Long also constructed many more successive bridges which were; Omdurman Bridge – Sudan, Desouk Bridge – Egypt, Tyne Bridge – UK, Alfred Beit Bridge – South Africa, Grafton Bridge – Australia, Lambeth Bridge – UK, Memorial Bridge –Thailand, Khedive Ismail Bridge – Egypt, Newport Bridge – Middlesbrough UK, Birchenough Bridge – Zimbabwe, Storstrom Bridge – Denmark, Chien Tang River Bridge – China and The Silver Jubilee Bridge – UK. 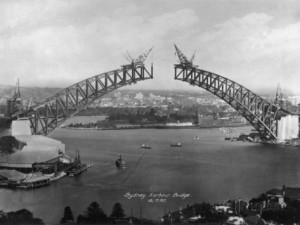