The Taj Mahal began construction in 1631 and was completed in 1653, taking a total of 22 years. The structure was built by Shah Jahan in dedication to his wife Mumtaz Mahal as a final resting place for her. His wife died whilst giving birth to their 14th child. The Taj Mahal is located in Agra, India. The cost of the building was 32 million Indian rupees, which in 2015 would be valued at around 52.8 billion Indian rupees ($827 million US) and took 22,000 workers to build it. The building is one of The Seven Wonders of the World. More than 1,000 elephants were used in construction to help carry materials. The Taj Mahal attracts 2-4 million visitors annually with over 200,000 from overseas. 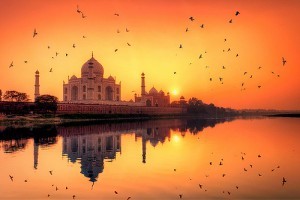 The Taj Mahal is one of India’s most recognisable and iconic images of India. It is considered a Wonder of the World due to its richness in history and how beautifully it is constructed. It has gracefully carved arch ways and delicate minarets. 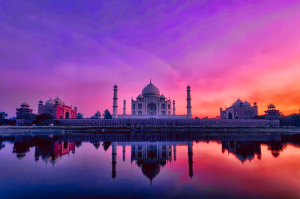 According to legend, it is believed that Shan Jahan had planned to construct another Taj Mahal in black marble across the other side of the river. However, a war with his sons interrupted these plans and they did not go ahead. The Taj Mahal also takes on different colours throughout the day. People believe that the changing colour of the building resembled the changing mood of females, in particular Shan Jahan’s wife Mumtaz Mahal. On a morning the building is pinkish, evening it is milky white and at night it is golden as it is lit up by the moon. Each side of the Taj Mahal are identical which creates a mirrored image on each side. Surrounding the structure is a number of spectacular gardens and a mosque. The total height is 171 metres. The building was constructed by using materials which were from India and Asia. The translucent white marble was brought from Makrana, Rajasthan, the jasper from Punjab, jade and crystal from China. The turquoise was from Tibet and the Lapis lazuli from Afghanistan, while the sapphire came from Sri Lanka and the carnelian from Arabia. All of the twenty-eight types of precious and semi-precious stones were inlaid into the white marble.