The construction of a police headquarters in Namibia being undertaken by China Jiangxi International Namibia is 80 percent complete. The headquarters are  being constructed in Oshikoto Region in Omuthiya. 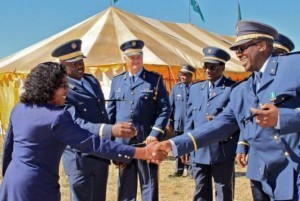 However construction work on the administration block is moving slowly, while the construction of accommodation facilities and the charge office is already finished.

The modern state of the art police headquarters is expected to accommodate about 500 members of staff and will be categorized as Class A, as it will be one of the largest police stations in the region. It will be made of a three-storey administration building, a police station fitted with a jail, houses meant for senior and married members of staff, a police barracks and entertainment centre, among others facilities.

was contracted to do the construction that started in 2014 and is scheduled to be completed by August to mid-September this year. The estimated cost of the project however remains unknown.

“It is very difficult to give you the cost while the project is in progress, but we are aware of the estimate cost. There are contingencies involved whereby some avenues add components to initial project cost or maybe there is nothing to add at all, so all these will conflict if we happen to reveal the cost now. All the information will be given at the inauguration,” said Nelumbu.

The police’s administration headquarters are being moved from Tsumeb to Omuthiya following the proclamation of Omuthiya as a town in 2008 hence making it the capital city of Oshikoto Region.

The staffs that were not attached to the head office will however remain behind According to the contractor, everything will be finalized by September, and they could start moving furniture, and by end of October or November they can fully move in.

Ethiopia to receive US $200m for its renewable energy program