Fall in the Great British Pound

On Friday 24th June 2016, the United Kingdom decided to leave the European Union. Many did not expect the majority of votes to be leave, however this was the case. The value of the pound decreased in a record breaking time. GBP plunged to a 31-year low against the US dollar and some share trading was put to a halt due to the uncertainty of the pound. 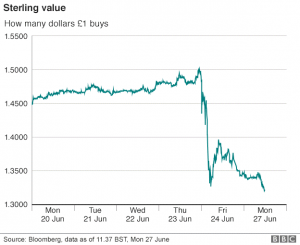 This means that other currencies if they were to trade with the UK now would be getting more for their money as the pound’s value has decreased a lot.

The pound fell by 3.2% to $1.32 which was the biggest one day fall against the dollar in history. This has scared and shocked many people not only in the UK but also worldwide, especially Europe as this has also affected the Euro. On the stock markets the benchmark FTSE 100 index closed down 2.6% at 5982.2.

Due to the decision to leave the EU, the UK prime minister David Cameron (remain party) was so shocked by the result he felt he could not take on the responsibility to run the UK without the EU therefore, he chose to step down as prime minister leaving the UK without someone in charge of their country. Now Europe want the UK to leave the EU as soon as possible to limit the disturbance to the euro zone.

Tema Motorway Interchange Police post to be constructed in Ghana

How to keep your machines running during hot weather