Milling technology has been Wirtgen’s core area within their company for over 50 years, meaning they are an experienced market leader within this industry. Milling was one of the first ways which roads were kept maintained and in good condition.

Milling has been a process in road construction since the 1950’s and these machines used rotary tillers which were either self-propelled or towed by tractors. However, due to a consistent increase in traffic this caused a bigger problem for wearing and the machine needed to be redeveloped to prevent the road from wearing as easy.

1970, was the birth of hot milling. This involved large gas burners being attached to the machine, which then heated the asphalt before laying. Road surfaces could not be repaired economically without damaging the material underneath, and because of the high costs plus the great amount of smoke produced from these machines, the method of hot milling was expensive and also not economically friendly. In 1975, the first ever cold milling machine was developed in Europe. It used carbide tools which ruled out heating the asphalt. And in 1979, rotating picks were introduced which meant that the machine could now remove the hardest layers on a road. Between 1985 and 1987, the use of tracked crawler units increased the traction on surfaces and also a mechanical milling drum was developed which helped enable higher productivity and more power. High precision leveling systems were installed onto milling machines in 1993, to ensure exact milling depths. This is defined by using vertically adjustable crawler units, so that the individual layers on the road surface can be removed precisely. 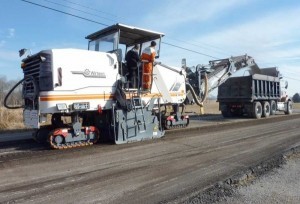 In 2005, extraction systems were put into place on the machines to reduce the number of airborne particles and therefore made them better for the environment. In 2010, the latest generation of milling machines set the standards as they are cost effective and ensure high productivity.

Ethiopia to receive US $200m for its renewable energy program