Kenya and Ethiopia have agreed on a deal that will see them construct a joint crude oil pipeline linking the two countries, this is after Uganda chose to export her oil through Tanzania’s Tanga port. The oil pipeline will run from Kenya’s coastal town of Lamu to Ethiopia’s capital city, Addis Ababa. 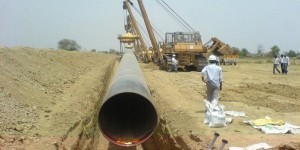 According to sources close to the discussions, the joint infrastructural project will also include construction of a 122km road that is part of the venture linking the two from Turbi to Moyale and a further 121km from Merille to Marsabit that will ultimately link Mombasa to Addis Ababa.

A statement from State House confirmed the reports and said that the two leaders witnessed the signing of the bilateral agreements which comprised of the oil pipeline deal.

“The two leaders witnessed the signing of bilateral agreements including a pact on the oil pipeline that will run from Lamu to Addis Ababa under the Lapsset project,” a statement from State House said.

The mega development project is approximated to cost US$ 2.1bn and its completion is anticipated to be in 2021; this is according to the Kenyan Ministry of Energy and Petroleum.

Ethiopia is also interested in gas production and exportation probably at the start of next year following immense discoveries.

Construction of Sahofika hydroelectric plant in Madagascar to begin in December