Louvres Hotel Group which is second in Europe’s hotel industry with a network boasting more than 1,100 hotels in 51 countries has signed a 20-year management agreement with Begez Business Group that will see them run the Royal Tulip Plaza Addis Ababa Hotel Luxury Style Collection. 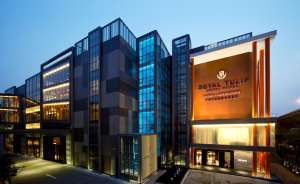 The major agreement was signed by the chairman of Bengez, Mr. Sebsebe Teklu and Mr. Alain Sebah, President of the Golden Tulip for French and East African countries.

Begez Business Group has signed deals with several Ethiopian companies like Jefor Contractors and BIGAR architects for the work on the constructions. The contract for the interior and exterior design was given to a South African company, Ngonyama Okpananum Associates (NOA).

At present, Royal Tulip is still under construction and is 40 per cent complete with US$ 21m already spent on the construction. The total cost of the construction of the 13 storey hotel will be approximately US$ 44m with the hotel scheduled for completion by mid-2018.

This is a good initiative that has so far seen tourism earnings in Ethiopia increase by 65pc per year between 2010 and 2015. The country made an aggregate of US$ 8.7bn during the same time. However, this year, the tourism industry had a slow start due to the aftermath of the anti-government protests and the imposition of a state of emergency.

Louvres Hotel Group is a major hotel industry player with 6 powerful brands ranging from 1 to 5-star: Première Classe, Campanile, Kyriad, Tulip Inn, Golden Tulip, and Royal Tulip. On the strength of their differentiated positioning, each brand seeks to challenge the usual standards of their category.

They all have something in common: a determination to innovate and a challenger’s state of mind.