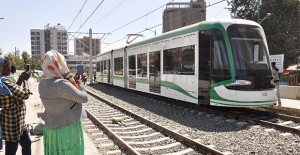 The 32km light rail system in Ethiopia which is Africa’s first light rail is expected to carry a capacity of up to 15,000 people per hour in one direction meaning it could attain four times that in all directions, with a projected top speed of 70km/hr hence leading to the reduction of traffic in the highly populated country.

A number of 39 stations are positioned across the service and a network of alleyways—including 12 escalators and 22 elevators, will direct commuters to the various railcars making everything seem easier. Fares could range up to US$0.5.

China Railway Group Limited is the company that was contacted to construct the transport system and they did it marvelously over three years after the Ethiopian government secured 85% of funding from the Export-Import Bank of China.

The same Chinese will also train the drivers and maintenance staff, while another Chinese company designed the power system.

Ethiopia, with a population of 94 million, is projected by the IMF to grow at 8% in 2015-16, the second-fastest pace on the continent.

The second five year growth and transformation plan in Ethiopia is now underway during which the horn of Africa’s nation intends to accomplish a number of massive projects including Africa’s largest power plant project.

Tanzania SGR project timeline and all you need to know