The land which connects North and South America was thought to be a great way of having a shortcut which runs through the Atlantic and Pacific oceans. Construction started on the Panama Canal in 1881. During construction, a total of 40,000 men helped build the structure, thousands of these dying due to recurring dangerous conditions such as floods and mudslides which also caused major setbacks. Despite the dangerous conditions, the project manager pushed on with the project as he was determined to have it completed. By the time the raised-canal plans were accepted, more than 22,000 workers had died due to diseases such as malaria, yellow fever and dysentery.

When construction began, it was estimated it would take a total of 6 years and be completed at a budget of $120 million which is equivalent to $78 million. However due to the major setbacks these estimations were scrapped as creators went over budget by millions which ruined the livelihood of 800,000 investors. In 1893, De Lesseps the creator was arrested and convicted of fraud and maladministration. He died two years later age 89.

Ten years on the U.S. was granted with the rights to the canal. And after a few years, the canal began to take shape. Huge locks were built at either side of the canal in 1913 and finally there was a route which passed between the Pacific and Atlantic Ocean. The first boat which passed through the canal was a French crane boat, Alexandre La Valley. The canal now passes an estimated 15,000 ships a year. The total overall construction of the canal was 33 years which was spent hacking through mountains and redirecting rivers. 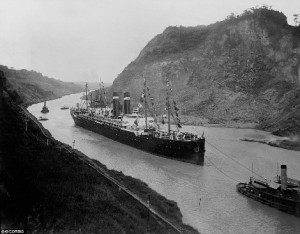 Construction of US$169 million Western Bypass in Kenya starts