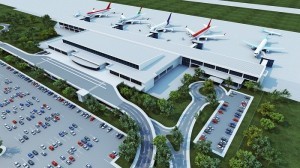 Terminal 3 project is meant to expand the facilities at the Kotoka International Airport to accommodate the gradually increasing number of passenger as well as increasing the number of airlines servicing the airport. According to Twumasi Ankrah Selby, Chief Director of the Ministry of Transport, terminal 2 refurbishment is going whereby the arrival hall has been completed. However, clearing works at the new terminal 3 is currently in progress.

Mapa and Gunal Construction, a Turkish construction giant has been awarded the terminal 3 project contract. The company has since then been on site mobilizing. The company contractor is expected to complete the terminal 3 expansion project in the first quarter of 2018. Terminal 3 is expected to have a capacity of 5 million passengers a year and will be located at the round air side stretching to the Old Fire Service area, to the Hanger area of KIA.

The airport occupies 1610 acres, and is located within the city of Accra which is about 10km from the City Centre. The airport was initially used as a military aerodrome by the Royal Air Force (British) during World War II, and later handed over to the civilian authority following the military pullout.

In January 1956, the Development Project for construction of a proper international airport for Accra was launched. Later in 1958, Ghana Airways began operations with Accra Airport as base and eventually the new passenger terminal was commissioned and the airport renamed Kotoka International Airport.