Egyptian authorities have called upon the Russian government to pump more funds into the Suez Canal project which is facing financial constrains. According to the officials the construction of the project is currently on halt after the government failed to raise funds that will complete the second phase.

Reporting on that on Tuesday, “Izvestia” cites a member of the State Duma Committee for Foreign Affairs, Anvar Makhmutov. The official believes that the move demonstrates a high level of confidence on the part of the Egyptian authorities towards Moscow.

Apart from that, Russia has traditionally good relations with countries of Arabian Peninsula. Without such contacts, the Russian Federation will not be able to cooperate to the utmost neither with Africa, nor with Asia. 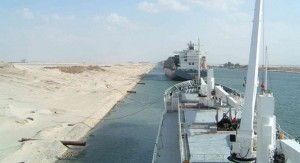 It is Egypt that might become an intermediary power in the process of deepening cooperation between Moscow and Arab monarchies of the Persian Gulf, in particular, with Saudi Arabia. The Phase one of the Suez Canal was fully financed by the government of Egypt and was carried out by local contractors with the help of key military soldiers.

It has helped in streamlining the transport sector which has been key in helping the economy of Egypt which was on the downfall after the heavy fights of the old regime government. In the past few years Egyptian government have been in agreement with Russian government to fund and carry out various projects that are considered to boost the economy of the country. The Russian government is currently funding and carrying out a major nuclear power plant in the country and is expected to deliver in three years time.

Sisi Visited Russia Several times to seal various deals which include the construction of the new city which is being developed by both international and local companies. Suez Canal is an artificial sea-level waterway in Egypt, connecting the Mediterranean Sea to the Red Sea through the Isthmus of Suez.

Crane parts and what they are for

US$ 8m Kiambu Mall in Kenya set to be opened