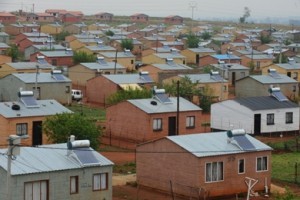 Construction of affordable housing in South Africa has received the much needed impetus, after the Department of Human Settlements (DHS) and the Banking Association of South Africa (Basa) said that they are currently working on a memorandum of understanding to help deal with housing backlog in the country. This will also help advance DHS’S aim of delivering millions of affordable housing units in the coming four years.

In an initial agreement on low-cost housing made in 2005, there was a target of up to US $3.30bn set aside for the development of such properties. However, this didn't go ahead.

According to the Acting Director General of DHS, Mbulelo Tshangana, the housing backlog stands at 2.1million with the government funding of US $12.69bn through the Medium term strategic framework. This was not adequate thus the private sector was needed to support the same.

Both parties would appoint working teams that would give effect to the MoU, with the intention of “operationalising” the partnership and accelerating the financing of affordable housing.

Extract from constructionreviewonline.com
To Read The Full Article Click Here

SGR Operator to Employ over 3,000 Kenyans