The launch of the Kenyan wind energy scheme, the Lake Turkana Wind Power project, is close to generating power this year. 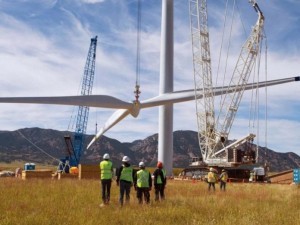 The founder of the project, Carlo Van Wageningen, said that the wind energy project should be completely connected to the national electricity grid and generating energy by the end of June this year.

Van Wageningen affirmed that nearly all of the 365 wind turbines have been put up and the last bunch of 30 is due to pull in at the port city of Mombasa in early February.

Denmark’s Vestas Wind Systems is supplying the turbines for this project.

“We already have 299 turbines standing and ready. Of those, we have 120 turbines fully connected to the substation and thus prepared to deliver 110MW of power,” van Wageningen said.

He further said: “We anticipate all the turbines to be erected, 365 by mid-March, and by mid-May latest, all of them will be fully connected to the substation, in readiness for energy delivery.”

In October 2016, the developers of the Lake Turkana wind project confirmed to have installed 155 of the 365 turbines over an interlude of six months.

It is stated that at the moment, Kenya Electricity Generating Company is the country’s only wind power producer; however, its capacity is just 25.5MW.

The Lake Turkana project is set to advance the nation’s capacity as it will supply 310MW in entirety, totaling Kenya’s whole current power generation capacity of about 2,341MW, the press reported.

Press  quoted van Wageningen affirming  that a 428 km, 400-kilovolt power line running from Loiyangalani in northern Kenya to Suswa in the centre of the nation, linking Lake Turkana Power to the national grid, should at last be ready by the end of June.

“So with any luck in the middle of this year we should begin conveying the cheap power,” he said.

The power line, being built by state-owned Kenya Transmission Company (KETRACO), had been due for completion by October last year but was delayed by demands for reparation from landowners along the route and additional problems.