The construction of Kenya’s Standard Gauge Railway has been halted following a fresh land row between the government and the Landowners and squatters in Mombasa.

According to the National Land Commission chairman Muhammad Swazuri currently they are required to pay up to US$30 million to land owners in order for the project to continue. Swazuri said the compensation was halted until landownership disputes are sorted out. He added that they have already started to review grants and disposition of public land that fall within the SGR project. 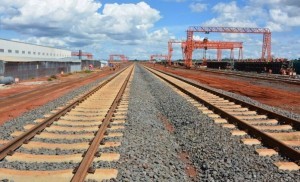 “We know that there are at least 1500 genuine title holders who are expecting some compensation and we will ensure that they receive the money as soon as possible.” He added.

Though the land boss added that they have already scheduled August 3-6 to have public hearings so that they can get the best way forward from the locals at the Government Training Institute in Mombasa.

“We want to ensure that we get a long lasting solution to the existing land wrangles between the local residents and the government so that the SGR project can continue” he added In their recent advertisement the team led by Swazuri clearly outlined at least 119 plots under different names and entities and some are said to be having ownership wrangles.

The landowners and companies listed in the advert include Kenya National Highway Authority, Colfax Holdings, Tawanda Transporters, Miritini Free Port, Curly Wurly, Maganda Scheme, Fort Properties among others. Interested parties have been asked to submit 10 copies of written representations and documents to the NLC by Friday.

Top 5 goals every project manager should aspire to achieve

Sierra Leone to construct a new Seaport in Bonthe District