Nigeria’s Minister of Water Resources, Suleiman Adamu, has said the Federal Government is fully committed to making potable water by 2030.

The minister who was speaking in in Dar Es Salaam, Tanzania on the sidelines of the Africa Water Week said that without universal access to clean water and sanitation, it will be hard to eradicate poverty and inequality in any country. “We are working to ensure that all Nigerians have access to potable water by 2030 through urban water sector reform programme. 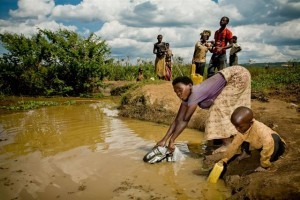 “We realise that implementing the first and second urban water reform programmes has resulted in moderate success and improved pipe water supply. If we put more efforts, we can achieve more,” he said. He noted that the safe water aspect of the Millennium Development Goals (MDGs) could not be realized owing to the sole reliance on budgetary allocation.

Adamu said that the Nigeria would soon launch the National Programme on Partnerships for Extending Water, Sanitation and Hygiene which is aimed at meeting the Goal 6 of the Sustainable Development Goals (SDG 6) which stresses on universal access to water. The initiative, he said, is a collaboration among the three tiers of government, communities and development partners to commit money towards meeting the SDG 6 by 2030.

According to the minister, Nigeria should take the leading stand, rather than depending on development partners, stressing that the government would do everything in its capacity to reform the water sector due to its significance to the health, agriculture and other sectors of the national economy. The minister said his ministry had set up a data bank and carried out census of water supply in addition to sanitation and water infrastructure in the whole country.

The meeting is aimed at laying the foundation for Africa towards achieving the SDG 6 and other aspects of the SDGs that touch on water resources management. The Week is a political commitment for creating platform to deliberate and collectively find solutions to Africa’s water and sanitation challenges. Unesco Water envoy for Africa Mwai kibaki said water scarcity is “perhaps the biggest challenge facing our continent today.”

For a continent that is wealthy in natural resources, he said, Africa’s annual per capita water availability is well below that of other continents.Water problems in Africa continue to be a hindrance to Africa’s development with reports of children dying due to contaminated water being commonplace.

4 power plants to be constructed in South Africa