Provinces and cities across Vietnam are falling into heavy debt after spending big on developing rural areas into new-style rural zones.

Local authorities throughout the country are scratching their heads over how to deal with the VND15 trillion (US$672.1 million) in total debts accrued from excessive expenditures on the establishment of these new rural zones. 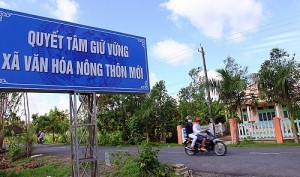 The piling debt was the primary topic of discussion at a meeting organized by the Standing Committee of the lawmaking National Assembly on Wednesday to review the National Targeted Program on New Rural Development for 2010-15.

Fifty-three of 63 provinces and municipalities throughout the country are indebted, Thanh added.

According to Chairman Thanh, market fluctuations leading to lower bids on construction projects are a primary reason for the towering debt.

The trend of building new rural zones while neglecting productivity within each locality is also exacerbating the problem.

National Assembly Chairwoman Nguyen Thi Kim Ngan expressed her concern at the gathering, stating that the new rural development was meant to target agricultural restructuring and sustainable improvement rather than the infrastructure projects that local authorities chose to concentrate on developing.

To alleviate their debt issues, many localities are stating their intentions to sell local land funds, a measure that is not quite viable due to current challenges in the realty market, said Chairman Thanh.

Several members of the National Assembly were worried about their inability to resolve their debts within the next year and many communes have been mobilizing budgets from local residents to pay construction loans, placing enormous pressure on all members of their respective communities.

The Ministry of Agriculture and Rural Development, in coordination with the Ministry of Finance, has been tasked with identifying methods to cope with the situation.

The government will also cease financial assistance to localities that fail to present viable solutions to their loan issues.