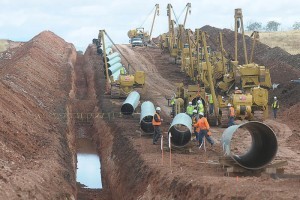 Tender to be announced

A tender for the construction of the US$ 4bn Kenya-Uganda pipeline that is expected to cover 1,500km is set to be announced before the end of this year.

The construction project has been incorporated into the Lamu Port- South Sudan-Ethiopia Transport Corridor infrastructure project.

The Lapsset Corridor Development Authority (LCDA) confirmed the reports and said that the tender that will be inviting companies to submit bids to put up the crude oil pipeline will be announced before the end of this year so as to pave way for the construction works which are projected to commence in early 2016.

LCDA Director-General Silvester Kasuku said that funds that will be used in the construction of the Kenya-Uganda pipeline  will come from debt and equity.

“The selection of a transaction advisor is almost complete and the first oil is expected to flow in 2019. The pipeline is a critical success factor of Lapsset, which will open about 70 percent of Kenya’s landmass towards economic development,” Mr. Kasuku said.

The pipeline which is expected to cover about 1,500km from Hoima in western Uganda to the Lamu port on Kenya’s Coast will be beneficial to the two countries as it will enable them to export crude oil.

It is anticipated that the Kenya-Uganda pipeline will be complete either in 2018 or 2019.