Equipment hire specialists have taken a look 30 years into the future at what they expect construction of the world to be like. The report that was constructed was based on the film ‘Back to the Future 2’, where the characters time travelled from the 80’s to our current time now. Equipment hire specialists have predicted what features such as buildings, technology, transport and health and safety may look like in 2045. Buildings are expected to be 30km tall, driverless vehicles, super strength exoskeletons which will create half man half machine that can use a range of attachments to complete construction work, mini cities in the sky and spaceports. In 2045 larger cities such as London are expected to change the most with access to space travel and new cities within cities. Space travel is expected to be the norm in 30 years time.

It all seems very hard to imagine doesn't it?

When watching ‘Back to the Future 2’ when it was first released, their predictions seemed almost impossible to imagine. However, they did get some things correct. In 1989, televisions were 3 feet deep. However, in the film a character is seen watching a flat screen TV, which is something that we have achieved today. Also video calling and tablets such as the iPad are things which have been created. Smart glasses are something which have also been produced today. Google have created ‘Google Glass’, which allows people to watch things through wearing the glasses and answer telephone calls. Although this invention is not a mainstream product yet, they are still been developed and promoted. Fingerprint recognition is something which has been developed on. Aspects such as laptops, phones and airports have took on fingerprint recognition. Alternative energy resources is featured on the film, today there are companies out there who are turning land fill gases into low carbon fuel for cars and trucks. Also, electric vehicles have come about. Flying cars is something which has not yet been shown to the public. However, there are companies who are working on this invention. In the film a character is seen with his laces tying themselves and today Nike is beginning to develop power laces.

What is the London Skyline predicted to be like in 2045? 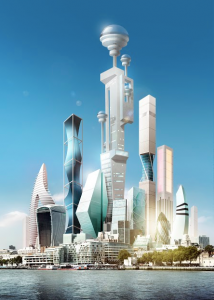 The London Skyline is predicted to have 30km tall structures with spaceports in 30 years time. Carbon based materials will be used to create these super tall buildings. 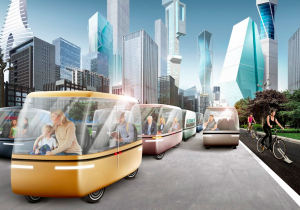 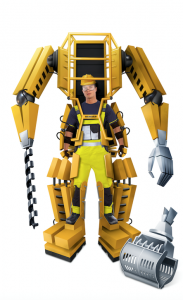 Builders are expected to have exoskeletons which makes them half man half machine so that they can complete construction work faster and also more safely. These exoskeletons can take on a wide range of attachments to complete different procedures of a construction job.

Back to the Future were correct with some aspects of their predictions of what 2015 would be like. However, time can only tell whether or not this will be correct.